I believe a discussion of the symptoms of Candida is beneficial when discussing gluten intolerance. Both conditions are connected to intestinal health, plus people who may have a compromised immune system may also be more prone to develop a Candida overgrowth and in turn suffer from symptoms of Candida.

Candida is a fungus that occurs naturally in humans in the mouth, intestines, vagina, and on the skin. As a rule, Candida does not cause any problems, unless it starts to grow out of control. Generally the immune system keeps the levels of this naturally occurring fungus under control, but there are a few situations that can cause an overgrowth of candida. A weakened immune system or prescribed antibiotics are the most common contributing factors. Gluten intolerance may also exacerbate the overgrowth of the fungus due to a compromised immune system. 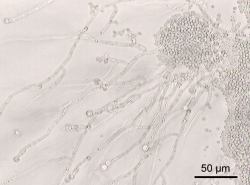 Taking antibiotics can lead to an overgrowth because it can disrupt the natural balance of “good” and “bad” microorganisms within the body, allowing for an overgrowth of harmful microbes like candida. A weakened immune system caused by a health condition like diabetes, HIV or cancer reduces the body’s ability to fight the overgrowth of harmful microbes and maintain a healthy balance between “good” and “bad” microbes.

Celiac disease or a non-celiac gluten intolerance may cause symptoms of candida if the immune system is weakened. People with undiagnosed celiac disease continue to cause damage to their intestinal lining as they continue to eat foods containing gluten. This damage can cause decreased nutrient absorption, which can lead to a compromised immune system over time.

Candida and celiac disease are treated as separate medical phenomenon because they are two separate and distinct medical conditions. While they are completely different, it is not uncommon to find one when you see the other. However, it is important not to misdiagnose one as the other.

Too often the specific symptoms of gluten intolerance are treated separately without researching what is at the root of these symptoms, so people often aren’t properly diagnosed for years after their initial visit to the doctor. Candida is one of these possible gluten symptoms so sometimes the candida is treated without looking for the cause of this fungal overgrowth, or without considering other accompanying symptoms that may indicate a gluten sensitivity or even celiac disease.

While the symptoms of candida can vary depending on where it occurs, here is a quick list of the most common candida symptoms:

The symptoms of Candida appear differently depending on where it is growing. If it appears in the mouth it is diagnosed as thrush; the symptoms can include white patches or lesions on the inside of the mouth. The area of the mouth where these patches occur can vary according to the individual, but could include the tongue, roof of the mouth, the inside walls of the cheeks, gums or in the back of the throat and tonsils if it spreads. These patches can look like cottage cheese and cause a cottony feeling in the mouth. If they are rubbed or scrapped they may bleed or become painful. Denture wearers may experience redness or cracking at the corners of the mouth. While thrush can occur in adults it is much more common in infants.

If an overgrowth of Candida forms in the vagina, it is often referred to as vaginitis or a vaginal yeast infection. These symptoms can include irritation, burning, redness and itching. If the infection becomes particularly severe, it could even cause the vulva to swell. Painful or frequent urination is also a common symptom, along with a vaginal discharge that can be thick and excessive, with the appearance of cottage cheese. There could also be pain during sex.

Candida can also cause problems on the skin, such as under the breasts, in the groin area, or in skin creases where moisture tends to accumulate. This is generally referred to as cutaneous Candidasis, with symptoms that include a rash, itching, redness or skin lesions.

A systemic Candida infection can form in a person’s internal organs or bloodstream, which can be a serious medical emergency. Although these infections are rare, they can quickly develop into a fatal situation if not treated. This severe version can sometimes develop in patients who are in intensive care or who have recently undergone an organ transplant.

Some proponents of alternative medicine think that candida overgrowth may be a widespread problem that is under diagnosed. The thought is that the overgrowth, which may be treated in part with an anti candida diet, causes a spread of yeast throughout the body through the bloodstream and the digestive system. They are concerned that a candida overgrowth or a hypersensitivity to candida may cause more symptoms including but not limited to:

Regardless of the form the fungus takes, it is important to treat it promptly and effectively when the symptoms of Candida appear. This generally involves various anti-fungal medications, which can be taken orally or applied topically depending on the location of the fungal growth.

Hi, I'm Sarah Patrick. If you're concerned about the role of gluten in your life, I'm here to help you find clarity and confidence through better understanding. Read More »